Carbon removal is now ‘unavoidable’ if we want to keep climate change below 1.5 degrees Celsius, according to a damning new report from the IPCC. This must not, however, be taken as an excuse to bet on capturing the emissions from fossil fuel plants. With CCUS technology simultaneously overpromising and underdelivering, any attempts at carbon capture should focus on directly removing it from the atmosphere, rather than allowing today’s heavy emitters to carry on with business as usual.

The latest release of its Sixth Assessment Report on the mitigation of climate change is a harrowing read. Overshooting 1.5 degrees Celsius, beyond which the catastrophic realities of climate change will become an everyday feature, is “almost inevitable.” Under current pledges, we are on track for more than 3 degrees of warming by the end of the century, with governments still planning to build new coal- and gas-fired power stations.

Returning to a 1.5-degree world by 2100, despite a warmer world in the meantime, is possible. But this is where carbon dioxide removal will be needed to reduce its concentration in the atmosphere. And we still need to reach net zero emissions by 2050 for this to be achievable, with reducing emissions by 43% over the next decade as an urgent priority.

“Negative emissions” will involve preserving the world’s trees, peatlands, and other carbon sinks, as well as incubating new ones. But at the scale the IPCC has outlined, technological intervention will also be required to offset our continued burning of fossil fuels.

Carbon capture comes in two flavors, both of which take the gas from major sources and then liquefy it for either underground storage or utilization. The first does this from fossil fuel plants and has so far only been used at small scale, with limited success. The second, direct air capture, involves removing carbon from the atmosphere through chemical processes. This is at a far earlier stage of commercial development, mostly because there is no established business model for it.

The conversation so far has been dominated by the first option, with its largest proponents being the US oil majors, as they remain determined to carry on with business as usual in the fossil fuel sector.

It’s becoming increasingly apparent that they will be unable to do so. Current flagship CCUS projects achieve far lower capture rates than the 85% figure that proponents like the IEA have suggested. In stark contrast to the “Growing momentum for carbon capture” that the IEA has been banging on about for years, including it as a key constituent in all-but-one of its pathways to net zero, it has consistently overestimated the growth of CCUS capacity while underestimating renewables. In its first roadmap in 2009 it predicted 22 GW of projects in operation by 2020, but less than 0.5 GW has actually made it into existence.

And the projects which have come into existence continue to fall short of the mark. The flagship Petra Nova project in the US captures less than 40% of the flue gas from one of four coal-fired units, while the Boundary Dam project in Canada has an overall capture rate of 31%. Research from Stanford University has highlighted that in testing, current technologies achieved as little as 10.5% of CO2 removal over a 20-year period, with only 20% to 31% captured over 100 years.

As recently as this past month, data from ExxonMobil’s Shute Creek CCUS project has reaffirmed this. The project, designed to remove CO2 from output gases and turn it into marketable methane, has only achieved a capture rate of 50% since it was turned on in 1986, with only 3% of it actually sequestered underground. Most of the captured CO2 has been sold to other oil companies which have used it to recover more oil from depleted wells.

It total, the project has only captured around 34% of the CO2 that the company claimed that it would.

When the price of oil falls, ExxonMobil has also been shown to capture less CO2 to cut its operating costs. “Despite huge investment globally over the last 50 years, and the pace of recent carbon capture build-up in the fossil fuel industry, the technology is still found wanting — as is the motivation of companies using it,” said IEEFA in uncovering this data. “CCUS should be seen as a subsidy harvesting scheme to prolong the life of the oil and gas industry, not an emission reduction investment.” 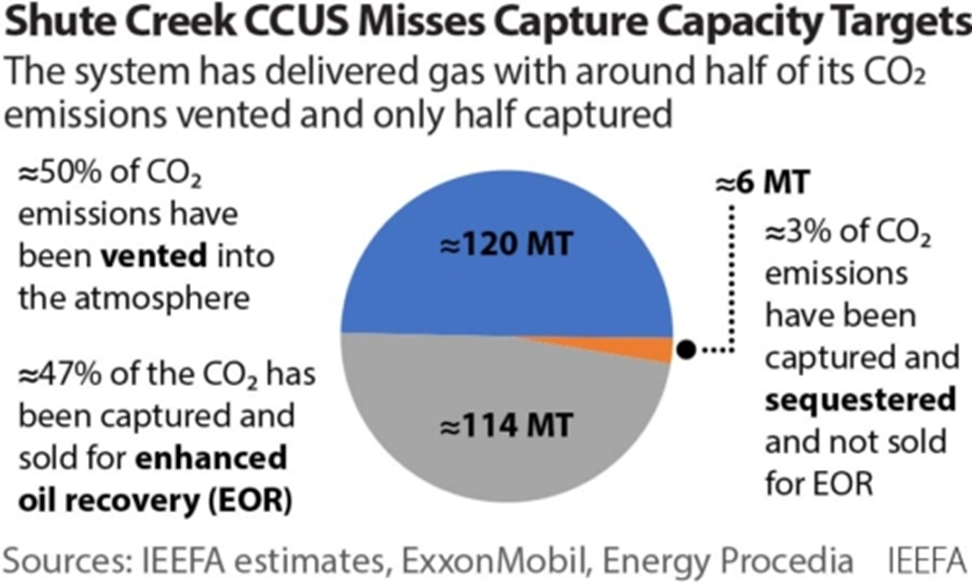 Despite this, governments across the world are continuing to push CCUS as a comparable solution to wind, solar and batteries, as a way of decarbonizing the energy mix. Currently, large government subsidies for CCUS are proposed in the US and are being granted in Australia through its Emissions Reduction Fund.

It has also been used to excuse investment in blue hydrogen production – using steam methane reforming and natural gas with CCUS attached – over green hydrogen produced using electrolysis. While some CO2 emissions may be captured, the huge amount of natural gas used in the production of hydrogen – around 2.7 tons of methane per ton of hydrogen produced – lifecycle emissions of ‘fugitive’ methane are still overwhelming. Methane leaks and emissions from wells and other equipment, accounting for around 3.5% of the total natural gas used across the blue hydrogen supply chain, nearly completely offset the benefits from capturing 85% of CO2 from steam methane reforming.

Even the IEA has said that if all available solutions were to be deployed across value chains, 25% of total oil and gas methane emissions would remain unaddressed. Adding CCUS technologies to existing production techniques is also extremely costly, with premiums often outweighing those of emission-free processes.

The conversation is changing. The IPCC was clear in the report that CCUS cannot be a substitute for eliminating fossil fuels from our lives. Banking on CCUS to capture 100% of the full-scope emissions from burning coal, oil, or gas, would be criminal. The attention given to the technology in the IPCC’s report (through statements such as “depending on its availability, CCS could allow fossil fuels to be used longer, reducing stranded assets”) must not be used as cause for further investment in the fossil fuel industry.

Focus on CCUS must shift toward reducing the cost and scalability of direct air capture being developed by the likes of Swiss start-up Climeworks. Capturing 10 gigatons of carbon dioxide a year through a direct air capture machine, however – the level forecast for 2100 in several scenarios in the report – would consume an amount of energy equivalent to half of the world’s electricity production, according to the report. Plant-based capture should be limited to use in industries such as cement making, where CO2 is released as a result of chemical processes rather than through the burning of fossil fuels.

This week’s report is the third instalment of the IPCC’s sixth assessment report since 1988, following a first section published last August that warned of the irreversible nature of human-made climate change; and a second at the end of February warning of catastrophic impacts.

The report also outlines how investments in the energy transition must be increase by at least six-fold to make the changes needed – although this figure is rapidly falling with the cost of renewable energy technologies. By 2050, the costs will amount to just a few percent of global GDP and will likely be more than offset by the additional benefits in planetary health.